Photos and Commentary From the Postponed Election 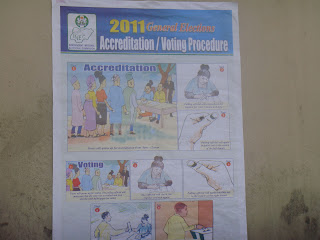 My mother woke up this morning like millions of other Nigerians: ready to vote. Unfortunately INEC officials slept last night knowing they were going to postpone the elections for the House of Senate and House of Representatives. Things being the way they are in Nigeria, communication between the head and the tail was slow so not only did my mother think she would cast her vote today, the polling officials thought so too. Thus, they showed up with their equipment and paraphernalia.


Here is the table for casting secret votes: 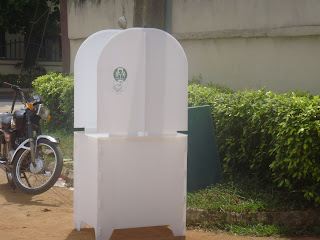 My mother jokingly dubbed it an 'open secret' station. In this semi-enclosed space, you press your thumbprint next to the 'umblerra' or the broom or whatever symbol takes your fancy and then you proceed to cast your vote in the ballot box. I would like to know the distance between the ballot box and the voting station. Is it enough for someone to snatch your piece of paper and check that you have voted for the right person? 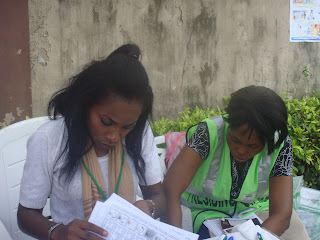 Here is a photo of the dutiful ex-corpers, refusing to close their station. 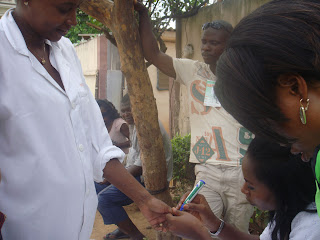 Here is a photo of a thumb being marked.

In fact, ten votes were cast before the news finally reached this small polling station that indeed, the election had been postponed. When my mother left, it had been decided that the ten votes would be destroyed but she did not actually see this happening. Another concern of hers is that the ink used to mark their thumbs will not have worn off by Monday when they come to vote again. Will they be accused of trying to vote twice? This is a small polling station so the chances of this happening are slim but in a larger station, where a hundred people may have cast their vote before the station closed, will these people lose their votes? And if they don't, could this be a loophole in the system? One person may vote twice or even three times at a large polling station and each time the ink on the thumb is pointed out, he/she will say that they voted on Saturday.

As to more general comments, my mother reports that the atmosphere was peaceful. 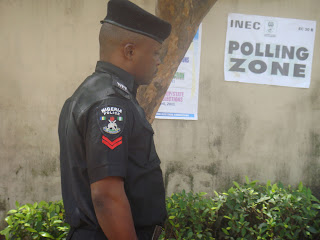 A policeman watching the proceedings. 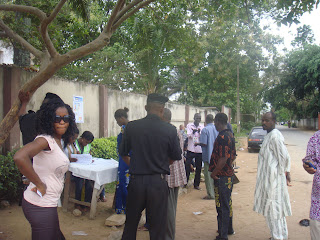 A semblance of a queue as voters stand around, trying to understand what's going on.

My mother and I put the low turn out down to the fact that many people in the area knew that the election was postponed. Hopefully on Monday, the numbers will be higher. More news on the elections then.