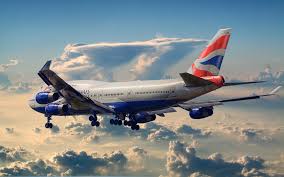 Instead of spending 6 hours watching movies on my last flight home, I decided to write and record the experience live and direct. Here's part one of my musings.

Separate the waters. I'm on the British Airways flight to Nigeria.  From the air on a clear sunny day with no clouds, the blue of the sky and of the sea merge into one on the horizon. All around is blue, no up and no down. Flying over England, the land below reminded me of sayings like the land is in the blood or the blood of England flows through your veins. It really did look like an organ with the thick lines of trees like arteries and veins and capillaries carrying thick green sap to England's people. And who are England's people?

The couple next to me are old. They sneeze and splutter and cough a lot. They cover their mouths when they do. Their hands seem ineffectual. Many germs escape I fear and mostly on to me but their politeness is appreciated. We are over France now. Just across the Channel and the landscape seems dryer, more arid and the pieces of the farmland jigsaw are smaller and browner. There also seem to be fewer trees or maybes it's because we're higher up. Some quite persistent turbulence. I am drinking Coke. I fear for your pages. The engine roar grows louder for a moment and then quietens down. I used the loo before I got on the plane but will it be enough? The flight has quite a few empty seats. Perhaps BA is not longer so popular, colonial mentality unwinding.

We're flying over what must be the Sahara Desert now. It's not the Sahara of shifting sands that is so popular in the imagination but the part of the desert that is craggy and brown, unending dryness to the front and the back of the plane. The ground is so unchanging it doesn't feel like we're moving at all. There are thin cracks in the land that look like the beds of where river and streams once flowed. We are leaving behind the crags now and moving on to the more archetypal Sahara. The cracks in the old Sahara look like dried up capillaries and veins, arid England. There are some depressions in the sand. They must be quite deep but from up here they look like pockmarks.

There is a dark thin ribbon running along the ground for what must be miles. It looks like a grey tarmac road but it can't be. Once you have a fixed point to look from, you realise how fast we're moving. In the few seconds it took to write this, the strange road has already disappeared beyond craning distance. I will make a way in the desert God says in Isaiah, where rivers of living water will flow. There's a patch of sand a lot redder than the rest of the desert, like a birthmark. There are lines running through the desert, swirling and sweeping and it makes you almost think there must be a pattern, some cosmic Artist whose handwork you would be able to fully appreciate if only you could go a little higher. That's how they saw the Nazca lines. They flew.

Stay tuned for Part 2.
Posted by authorsoundsbetterthanwriter at 20:40