From the Passenger Seat 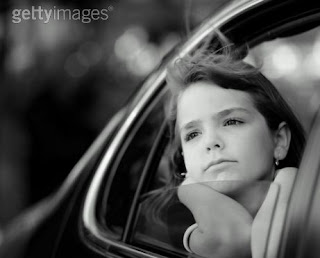 In my childhood, most of what I saw of ugly Lagos (the one plastered over the international media despite middle class protest) I saw from the passenger seat of my father's old, square, blue Mercedes. We never took public transport. We rarely walked not even when our school was fifteen minutes away. Public Transport in Lagos can be a dangerous thing, walking on the road is arguably even more dangerous, so everywhere we went, we went in the old, square, blue Mercedes.

We travelled Lagos in that car and on our travels, I couldn't help seeing ugly Lagos because you see, the more you travel around Lagos, the more you realise that quite a large chunk of Lagos is ugly Lagos. The houses with gaping tooth windows, the gutters swilling into the street, the holes that stretch from left to right side of the road: they are everywhere.

"Show them Lekki!" the insulters of the BBC's 'anti-Nigerian' documentaries cry, "show them VGC! Show them the nice areas that have good roads and big houses and milk and honey not mud and slime flowing through their streets. Show them!"
I know Lekki; I know VGC,;I know old Ikoyi and it is true, they are beautiful places. But before I can reach Ikoyi and taste its bourgeois pleasures, I must first pass Isaleko and its slum housing. Before my shoes stride across the painstakingly cobbled streets of VGC, I must glide past the villagers of Osapa and their electricity free, water free, noise plenty shacks.
Ugly Lagos is everywhere even right in the heart of bourgeois Lagos, right in the centre of Ikoyi herself.
And so I saw ugly Lagos in the passenger seat of my father's old, square, blue Merc as I drove from one middle class play ground to another. I rarely stopped to get down and see except when visiting a relative of mine who lived in ugly Lagos.
She lived there by accident (if such a thing is possible). Her house had once been on prime property, belonging to respectable, pristine, Lagos society but slowly, without anyone noticing, not even her, ugly Lagos, crept, and crept, and crept closer until one day, she woke up in the middle of a slum.

This relative of mine has moved now -the neighbours were giving her headache- and she is once more firmly ensconced in good looking Lagos. The old, square, blue Merc is gone now. It died of old age. Still the passenger seat remains, albeit in another vehicle and still, I see ugly Lagos from its comfort.

Maybe I should start thinking more about how to clean up ugly Lagos or one day I will wake up in the middle of ugly Lagos and there will be nowhere to move to.
Posted by authorsoundsbetterthanwriter at 18:11