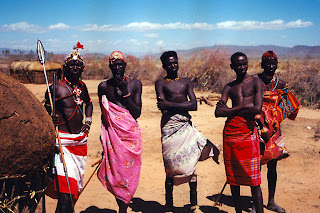 I don't really understand what people mean when they ask what tribe are you from? I mean of course I know what they literally mean. Are you Igbo? Or Hausa? Or Yoruba? Or Ijaw? Or Ibibio? Or Itsekiri? Or Nupe? Or one of those lines along which Nigeria is divided. But I don't know what they mean in concrete terms. It's all very well and good to label me Igbo because my father is Igbo or mixed tribe, because my mother is Yoruba, but what does this actually mean?
"It's your blood," a relative of mine once said to me when I denied that I was Igbo. "How can you deny your blood?"

This relative of mine is generally quite lucid so I knew he didn't mean if you spilled my blood on the ground it would start singing the theme tune to Things Fall Apart.
"What do you mean?" I asked and he replied something along the lines of, "There are certain things that will show up in your character that will make people know you are Igbo."
"So even if I don't speak Igbo and I don't understand the symbols in a traditional wedding, I'm still Igbo."
"All those things are superficial."
"What do you mean?" I asked.
"I'm talking about the Igbo character."
"And what is that?"
"Like," he paused to gather his thoughts. "Like... like, Igbo people are naturally sharp."
And then he went on to list a few of the other general 'characteristics' of Igbo people. Money savvy, smooth talkers. The traits he gave were positive but there are the more negative ones. Stingy, bourgeois, grabbing, tacky.
"And what about Yoruba people?" I asked. "What are their characteristics?"
"They always know where things are happening. "
"And Hausas?"
"They are gentle."
And the more he talked and the more you listen to many Nigerians talk, the more apparent it becomes that what we call tribe is actually stereotype and has very little to do with culture. Of course there are cultural differences between an Itsekiri man and an Igbo man. Language, food and dress are a few of these but the fact of the matter is that most people speak English in addition to their native language, most people eat rice, few people turn up to work in their full traditional regalia. The more urbanised we become and the faster we move into the 21st century (willingly or unwillingly) the more desperately we try to cling to what we see as our 'tribal identity'. We can no longer identify our ethnic group by markings on our faces or secret hand shakes and so we run behind these stereotypes. Yoruba men are this, Nupe women are that.

And this thing of classifying people along stereotypes just to preserve our identity and sense of apartness, is very dangerous. It led to the Holocaust; it led to genocide in Rwanda and it has led in more recent times to this idiotic thing that the PDP call 'zoning.' As if there is any difference between an Igbo thief and a Hausa one.

I am Nigerian first. Any day and everyday, Nigerian first. Then Lagosian (not Yoruba). I make the distinction because Lagos is a cosmopolitan city that time and time again defies tribe. Then I suppose if I had to fill a form that didn't allow me to explain my lengthy views on tribe, I would tick Igbo and Yoruba.

This is the last post in Nigeria month. It is not the last time I will blog about Nigeria but perhaps I will retire from this topic for a while. Hope you enjoyed.
Posted by authorsoundsbetterthanwriter at 16:21

Email ThisBlogThis!Share to TwitterShare to FacebookShare to Pinterest
Labels: About Me, Nigeria, Nigeria Month