My Ghana Trip on CNN 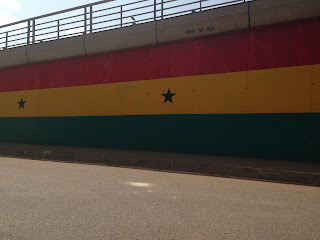 Here's a piece I did on my trip to Accra for CNN:

'With only a 45 minute flight separating Lagos and Accra, you'd think I'd have been to Ghana at least once in my 22-year existence. Unfortunately until July 2013, the concepts holiday and Africa have never gone together in my head.

Holiday was Italy and structurally unsound towers; or America and discount shopping or France and baguettes. Not Ghana, longstanding "frenemy "of Nigeria, with the football team we all rooted for in the last World Cup. Yet, that's no reason to actually visit the place.'

Read the rest here. Also below is the promo video we did for the tour which for some reason I forgot to post here.

I read Wole Soyinka’s poem, Telephone Conversation when I was fourteen. I liked it so much I made it the desktop background on my laptop. Each time I turned on this shiny new device, I would read the words, ‘The price seemed reasonable, location indifferent. The landlady swore she lived off premises.’ The poem struck me. Perhaps it was because I was in an English boarding school, discovering for the first time my ‘blackness.’

‘How dark?’ Soyinka ‘s landlady asked the character who I assumed was Soyinka himself. ‘Facially, I’m brunette.’ Facially I was... I had never stopped to consider. I was Nigerian. My classmates, sensitive to but ignorant of the nature of my dislocation, would sometimes say as if in reassurance, ‘I think black people are cool.’ Why are you telling me, I would wonder but never ask?


My spine weakened a little when I moved to England. Confident, boisterous, perhaps overbearing in Nigeria, I became unsure in England: unsure of my accent, unsure of the value of what I knew, flabbergasted by my ignorance of Jack Wills and lacrosse. Soyinka’s poem put some calcium back in my bones.  Every time my eyes wandered to the bottom of the screen and read, ‘Friction, caused- foolishly, madam- by sitting down, has turned my bottom raven black,’ I would shake with laughter, the punch line new again. A new country was to be met with this verve, this panache, this style, this trademark Soyinka wit. No apologies for where I was coming from. None at all.

The price seemed reasonable, location
Indifferent. The landlady swore she lived
Off premises. Nothing remained
But self-confession. “Madam,” I warned,
5         “I hate a wasted journey—I am African.”
Silence. Silenced transmission of
Pressurized good-breeding. Voice, when it came,
Lipstick coated, long gold-rolled
Cigarette-holder pipped. Caught I was, foully.
10         “HOW DARK?” . . . I had not misheard . . . “ARE YOU LIGHT
OR VERY DARK?” Button B. Button A. Stench
Of rancid breath of public hide-and-speak.
Red booth. Red pillar-box. Red double-tiered
Omnibus squelching tar. It was real! Shamed
15         By ill-mannered silence, surrender
Pushed dumbfoundment to beg simplification.
Considerate she was, varying the emphasis—
“ARE YOU DARK? OR VERY LIGHT?” Revelation came.
“You mean—like plain or milk chocolate?”
20         Her assent was clinical, crushing in its light
Impersonality. Rapidly, wavelength adjusted,
I chose. “West African sepia”—and as an afterthought,
“Down in my passport.” Silence for spectroscopic
Flight of fancy, till truthfulness clanged her accent
25         Hard on the mouthpiece. “WHAT’S THAT?” conceding,
“DON’T KNOW WHAT THAT IS.” “Like brunette.”
“THAT’S DARK, ISN’T IT?” “Not altogether.
Facially, I am brunette, but madam, you should see
The rest of me. Palm of my hand, soles of my feet
30         Are a peroxide blonde. Friction, caused—
Foolishly, madam—by sitting down, has turned
My bottom raven black—One moment madam!”—sensing
Her receiver rearing on the thunderclap
About my ears—“Madam,” I pleaded, “wouldn’t you rather
35         See for yourself?”
Posted by authorsoundsbetterthanwriter at 21:41 2 comments: 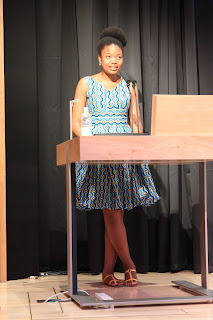 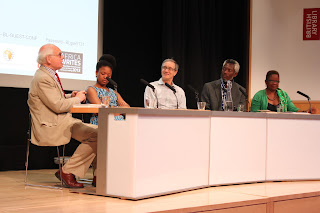 Read at the Africa Writes Literary festival in the British Library. Photos courtesy Carmen McCain.
Posted by authorsoundsbetterthanwriter at 12:19 2 comments: