Since the end of July, the Theatre Royal in Stratford has become Nigeria House Stratford and people like King Sunny Ade, Seun Kuti, and Wole Soyinka have danced, stormed off and read poetry on that lovely stage. I was fortunate enough to be invited to take part in two panels about Nigeria Literature. The event was organised by CORA and the British Council and I had a really excellent time. It was great to meet an author like Helon Habila whose work I've read and admired for so long and then to also meet writers who are new to me like Diran Adebayo, the poet and playwright Zainabu Jallo and the poet Nnorom Azuonye of Sentinel Nigeria. All the photos I've put up here were taken by him.

Ike Anya (big grin, third from right) was the compere for Monday afternoon. The physical audience was a little scanty but we had some listeners online and questions coming in via facebook. My favourite part of the day was our dinner afterwards. There was an excellent Nigerian 'buffet' going for twelve pounds fifty. Sadly the caterers were mistaken as to the nature of a buffet. We could pile all we wanted to eat on our plates ONCE and only once. In vain did I point out that the term buffet had been inappropriately used and we should be allowed at least two trips. In vain did I bring out my kindle and open The American Standard Dictionary. The food was good though, especially the jollof rice and the conversation was better. Its amazing what fish pepper soup, pounded yam and Star will do. We deconstructed, analysed and solved all the problems with Nigeria. You might say its empty talk but Lenin wandered round Europe for years, talking empty talk. Seretse Khama walked through London for years, talking empty talk. Talk is too easily despised. Nothing begins without words. And anyway, it was fun. I lost my voice trying to keep up with the very loud male opposition and sounded a little croaky in my event the next day.  Rotimi Babatunde (whose fantastic short story Bombay's Republic won the Caine Prize) was the most skilled at the art of conversation, waiting his turn to speak, never raising his voice and always saying what he had to say succinctly. I can only aspire. 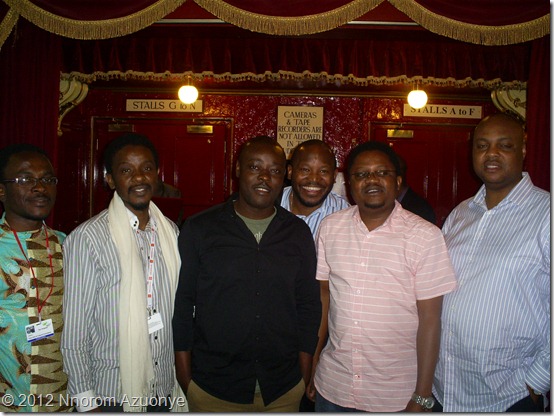 There were some organisational issues. African time. AFRICAN TIME. AFRICAN TIME!!! Yes, we know time doesn't control us. Yes, we know we can not be bound by the ticking of the second-hand but at least, let the minute-hand of a clock bear some weight with us. I arrived about forty-five minutes early on the first day, in keeping with the standard practice at most festivals I've been to. That is all I will say on the matter.

To see the rest of Nnorom's photos, click here.
Posted by authorsoundsbetterthanwriter at 23:20 3 comments: