Yaaay. We thank God. It's a 30,000 pound prize for novelists under 30. There's a nice mathematical symmetry to that. The longlist is made up of ten people and my friend Andrea Eames is on the list as well. Whoop.

I studied one of Dylan Thomas' poems for my English Literature A-Levels and it was very stirring and powerful. I'm going to paste it here.

DO NOT GO GENTLE INTO
THAT GOOD NIGHT

Do not go gentle into that good night,
Old age should burn and rage at close of day;
Rage, rage against the dying of the light.


Though wise men at their end know dark is right,
Because their words had forked no lightning they
Do not go gentle into that good night.


Good men, the last wave by, crying how bright
Their frail deeds might have danced in a green bay,
Rage, rage against the dying of the light.


Wild men who caught and sang the sun in flight,
And learn, too late, they grieved it on its way,
Do not go gentle into that good night.


Grave men, near death, who see with blinding sight
Blind eyes could blaze like meteors and be gay,
Rage, rage against the dying of the light.


And you, my father, there on the sad height,
Curse, bless me now with your fierce tears, I pray.
Do not go gentle into that good night.
Rage, rage against the dying of the light.

Posted by authorsoundsbetterthanwriter at 00:01 No comments:

As part of the Olympics, there's a huge Nigerian fest going down a the Theatre Royal in Stratford. On the 26th, 30th and 31st of July there'll be Nigerian authors speaking and reading from their work, including Sefi Atta, Helon Habila and this year's Caine prize winner, Rotimi Babatunde. Yours truly will also be poking her head in at two of the events, which are free. FREE I tell you. For details of registering  for the three events click, here and here and here.
Posted by authorsoundsbetterthanwriter at 16:14 No comments:

An Afternoon With Chief Servant, Governor Aliyu of Niger State 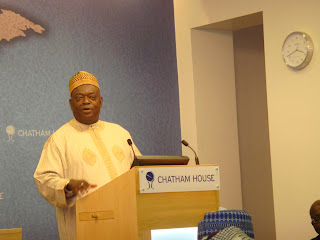 The talk was organised by Chatham House and was titled, 'Nigeria’s Unity and Regional Socio-Political Groups: Influence and Impact of the Northern States Governors Forum' and the speaker was Dr. Mu'azu Babaginda Aliyu, Governor of Niger State and head of the Northern States Governors Forum (N.S.G.F). I saw someone going for the same event on the tube. He was wearing a pin striped black suit, a black shirt and he was carrying a slightly battered, black leather brief case. I don't know how I knew we were going to the same place. I just did. My Naija radar went on alert.

I arrived at the venue just as the governor was making his way to the podium.The room was almost full and there were only a few empty seats. A woman manning a camera on a tripod stood in the middle of one aisle.  She was wearing a flowing gold kaftan with rich embroidery on the edges and a shawl was wound round her head. The NTA logo, unmistakable brown and orange, was printed on the side of her camera.

By the time I had settled down in my seat, the governor had started speaking. He was heavy set with bags under his eyes but he seemed like a jolly person. He had a curious habit of flicking his tongue out when he was about to crack a joke, which happened often during his talk. He began by recognising the members of his entourage.

Chairman of the Traditional Council.
Emir of Minna.
Speaker of Niger State House of Assembly.
An Honourable from Niger State.

These are not all the people he mentioned but these were the posts I got down. He then moved on to give a brief biography of the N.S.G.F and the role it has played in Nigeria's recent history. It was made up of the 19 states in the North West, North Central and North Eastern part of Nigeria. According to Governor Aliyu, the N.S.G.F had played a pivotal role during the Yaradua crises as it was the first group to call for Goodluck Jonathan to be recognised as acting president. Lastly, a point which he reiterated throughout his talk, the N.S.G.F did not believe in the break up of Nigeria.

He gave a lot of interesting statistics. 10% of Nigeria's land mass is in Niger State. 80% of the land in the state is used for agricultural production and although this farming is carried out on a subsistence level, it is still enough to provide the country with 1/3 of its rice quota.

I must say that there was little in the main body of Governor Aliyu's talk that I disagreed with. He spoke of the unconstitutional nature of a Sovereign National Conference saying, 'You can't have two sovereigns in one state.' There was already a body of elected individuals drawn from all over the country whose job was to handle matters such as the redrafting of the constitution. It was called the National Assembly and in any attempts to change the constitution, they must be at the fore.

He also  spoke about the spurious division between the so-called 'settlers' and so-called 'indigenes' in Niger State, drawing parallels between his state and the situation in Jos at the start of their crisis. A good number of Niger's 'indigenes' were actually Hausa speakers from neighbouring Chad and Niger and they were appropriating benefits meant for Nigerians at the expense of  'settler' Yorubas and Igbos who had lived in the state for decades. For example,  'indigenes' paid lower school fees than 'settlers' and so he abolished the payment of school fees in the state.

He spoke of religious radicalisation in Niger, giving as an example the group Dar es Islam, a name which roughly translates to The House of Islam. It was a group that began in the 1970s with 7 people and by 2007, had grown to  9,000. They believed that anyone outside their group was not a Muslim. When members of the security forces were sent to spy on the group, they ended up being absorbed into it. Eventually, more concerted government action was taken and it was discovered that 3/4 of Dar es Islam was not Nigerian.


He then moved on to talk about what he termed the 'Boko Haram franchise,' starting this segment of his talk with a joke saying, 'The Boko Haram thing. I'm sure many people will be interested in that thing.' The franchise nature of the group was of course that anyone wreaking havoc, including armed robbers could do so under the masque of Boko Haram.


Sometimes he would segue into random asides that were neither here nor there. When he briefly mentioned the crisis in Jos, he also spoke of the Fulani channel than ran throughout West Africa. According to him, whenever a  group of Fulanis was threatened in one part of the continent, they would send kolanuts to their brethren elsewhere and these would then come to their rescue and avenge any wrongs perpetrated against them. Such urban legends are the stuff ethnic distrust is made of.


He closed his talk with the now familiar mantra of all state Governors in Nigeria, from the East, South, North and West. He called for decentralisation and more devolution of power to the states.

As usual, the QandA proved to be a lively part of the event. Needless to say, very few people asked one question and even fewer asked brief questions. On being addressed as 'Your Excellency', Governor Aliyu replied that this title was reserved for the President of the country and the Ambassadors that represented him.  For him, Chief Servant (a bit of a mouthful) or Mr. Governor (my preference) would do.

During the QandA, a question was asked that allowed  the Governor to tell us about the administrative structure of his state. There are 29 local government areas and 274 wards. He discovered that very few policies made at the state level were trickling down to the ward level and so he made a novel amendment. Every month, 1 million Naira would be given to each ward to carry out whatever project they wanted. The only condition for receiving another million the next month, was proof that a project was being carried out. Explaining the rational behind this policy he said, 'the villagers know their problems and have solutions to their problems.'

Yours truly worked up the courage to ask a question. I was so scared, I forgot to introduce myself and was reminded of this by the vocal crowd. It's a question I want to ask to every Nigerian official who expresses support for the removal of the fuel subsidy as Governor Aliyu did in his talk. Here it is;

'You mentioned that you supported subsidy removal which was in effect an austerity measure. What personal austerity measures have you taken since January. For example today, I see you've come with quite a large entourage.'


Yes, I said it. He took it quite well actually. He smiled when I asked the question and  when he answered, he addressed me directly. He explained that when he travelled, he liked to bring members of his state for short educational courses and he also wanted to expose them to what 'Chibundu was thinking about them abroad' and how the rest of the world saw them. I found myself warming to the Governor of Niger State. He seemed a good sport.

Not so his supporters who accosted me on the steps when I was leaving.
"Are you the one who asked the Governor that question about his entourage?"
"Yes," I said to man in the black suit, not the same one I had seen on the tube.
"Well you should get your facts straight then. Not all the people that came live in Nigeria."
"So you're telling me the Speaker of the Niger State Assembly does not live in Nigeria?"
"Not him but-- just get your facts straight," he barked.

There were about five of them who I then entered into a discussion with about the rights and wrongs of travelling with a large entourage while pushing austerity measures. Only one was conciliatory and polite. He, I think, was the only actual member of the governor's entourage. The rest seemed to me to be Nigerians in London looking for contracts.
"So where are you from?" one of the ruder members of our discussion asked.
"I'm from Lagos."
"Come on. With a name like that you can't be from Lagos."
"So you're now making distinctions between settlers and indigenes."
That drew a laugh from the group. Better quit while you're ahead, I thought to myself.
"It was nice to meet all of you," I said quickly and walked up the stairs before somebody will just dash me hot slap.

My name is Chibundu Onuzo. God bless and good night.
Posted by authorsoundsbetterthanwriter at 17:36 4 comments: