This guy is talking sense. The subtitles are hilarious.
Posted by authorsoundsbetterthanwriter at 23:42 1 comment: 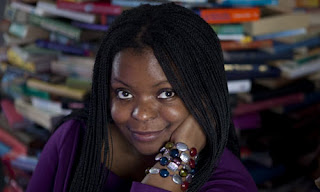 Petina Gappah, (disclaimer: she's also a Faber author) has given me an incredibly nice shout out on her blog. I blush as I give you this link.
P.S
Check out her braids. Next time I go to Nigeria I'm going to do this hair. Unfortunately, it's impossible to do such in England unless you are a millionaire.
Posted by authorsoundsbetterthanwriter at 15:59 2 comments:

Did I Ever Tell You Guys I Sing?

Probably not. Here's a cover of Carmen's God in America that my sister and I did about a year ago. My sister is on the guitar and I do most of the vocals. It's languishing in the backwaters of Youtube. We filmed the rose instead of our faces because we were in our nighties while we were singing and looking rather ming. We don't want to affect our bride prices.


P.S
Just listening to the song again, I feel it's particularly relevant in relation to what's going on in Northern Nigeria. If people had spent the money they were supposed to on improving security, improving education, improving the standard of living, training our police officers and not turning them into them brutal tit for tat forces, as bad as the criminals, then we wouldn't be having this situation. We don't need leaders who profess religion. We have them ten for one Naira. We need God fearing men and women in Nigeria.
Posted by authorsoundsbetterthanwriter at 01:05 2 comments:

Email ThisBlogThis!Share to TwitterShare to FacebookShare to Pinterest
Labels: Music

The Barack and Michelle Obama Effect 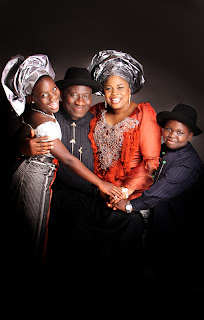 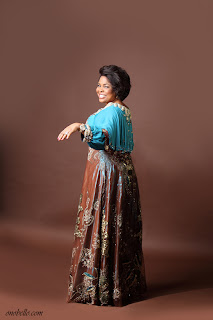 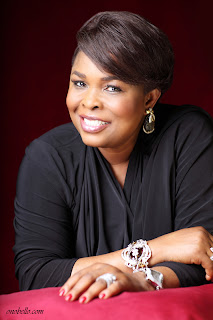 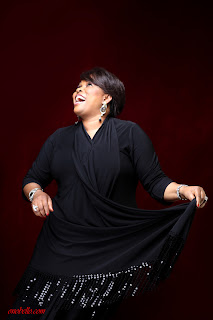 The Jonathans as shot by T.Y Bello. Images from onobello.com
Posted by authorsoundsbetterthanwriter at 00:18 No comments:

An excellent talk from a priest who has known all the Heads of State since General Yakubu Gowon and sat on the Oputa Panel. In my utopia, tribe would play a very minor role in the functioning of Nigeria but he discusses, rather humorously, the reality as it is now.
Posted by authorsoundsbetterthanwriter at 23:59 No comments:

Email ThisBlogThis!Share to TwitterShare to FacebookShare to Pinterest
Labels: Nigeria, On the way, Talks

100th Post and the Case of the Reclining Chair 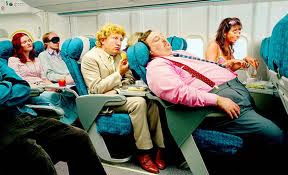 One massive deadline has been slain. I feel I can loosen my belt a bit. Incidentally, it is also my 100th post so I've been thinking of something epic and deep and funny to write about. I'll save it for my 1 year blog anniversary. Until then, I thought I should knack you the tory wey happen as I dey come from Nigeria back to obodoyinbo.
The flight was full. Nigerians it seems are becoming more affluent. So affluent that they now travel with their house girls as one woman announced to the whole plane. Her children were sitting together but the house girl had not been put with children. I mean, what is the point of taking a maid to England if she's not going to look after my children. And I can't look after my children because I'm in Upper Class. Did everyone hear that? I am travelling upper class and my maid has been separated from my children. Air hostess please sort this out so I can go back to upper class and stretch out on my fully reclining seat while all of you sit in economy and roast. Of course, no-one wanted to switch seats to let the children be re-united with their nanny. I don't know how that matter ended because I started eavesdropping on the phone conversation taking place next to me.
The woman had just 'flown in and flown out.' It was a 'quick one.' Just 'a few days.' You know how we big girls do. In fact, she wanted to go upper class but the plane was full so she had to settle for an economy ticket because she needed to get back to work. You know how we big girls do. If that's all that happened on the flight, it would have been enough gist for me. A little lighthearted showing off from my fellow Nigerians is always of interest. I settled down in my seat, hoping the six hours would go quickly. I was on my first movie when a woman in the row behind me, tapped my neighbour and said,
"Excuse me. Please move your seat forward. It's disturbing me."
My neighbour replied, "No sorry I cannot. The person in front of me has reclined their chair so I must recline mine."
I thought the matter had ended. I returned to my movie. Next thing, the woman punched my neighbour's chair until it was in an upright position. What followed was the most bizarre sequence of events. My neighbour would recline her chair fully. The woman would punch it upright. Recline. Punch. Recline. Punch. During this sequence phrases like,
"You're making me uncomfortable."
"It is my constitutional right to recline my chair."
"You cannot inconvenience me."
"I should have travelled upper class."
were thrown around. Eventually, air hostesses had to be called in.The uncomfortable lady could not see her screen, her knees were cramped.
"Then recline your own chair madam," one of the hostesses said reasonably.
"I do not want to recline my chair."
And that was the end of that line of persuasion. Another hostess tried a different tack.
"Madam, why don't you swap seats with your husband if you're so uncomfortable."
"I do not want my husband being inconvenienced by this woman."
At this point, my fellow Nigerians began to join the fray.
"Madam raise your chair small."
"No, she is not the one that should raise her chair. It is this woman that should push back her own."
"Why must we Nigerians always embarrass ourselves outside."
My people I laughed ehn. At first, I tried to hide it by covering my mouth but as the confra grew noisier my laughter increased in volume. Eventually a compromise was reached. My neighbour reclined her chair half way and the matter was closed. I returned to my movie with tears still in my eyes.
About an hour later, the inconvenienced passenger's husband decided to try his own luck. He too felt that the lady in front of him (also on my row) had reclined her chair too far back. He had also seen how successful his wife had been. So he tapped the lady and said, "Excuse me, your seat is too far back."
Her response was classic.
"Don't even start that nonsense."
And that ladies and gentlemen is how you shut up the passenger behind you when he/she tries to impinge on your constitutional right to fully recline your plane seat.
Posted by authorsoundsbetterthanwriter at 01:56 13 comments:

Just back from a reading with all the shortlisted authors for the Caine Prize. I was 15 minutes late so I only heard 3.5 stories but all 3.5 were excellent. The winner will be announced tomorrow. I have a favourite but I wouldn't place a bet on it because the standard is so high. You can read the entire short list here. 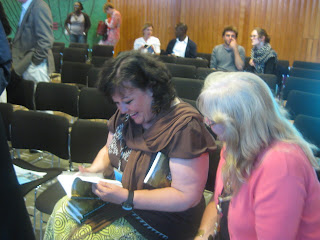 Lauri Kubuitsile author of 'In the Spirit of McPhineas Lata. Her story was very humorous. It left the audience laughing at loud. Read her blog here. 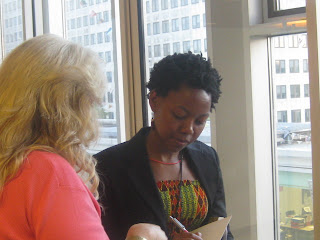 NoViolet Bulawayo. Author of Hitting Budapest. Particularly loved the fro. Also the name is very unusual. She described herself as a 'literary activist' but unfortunately there was not enough time for her to expand. 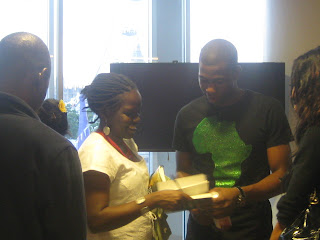 Beatrice Lamwaka author of Butterfly Dreams. She had an interesting explanation for why she used the butterfly as a metaphor in her short story. It's because butterflies are difficult to catch, like dreams. 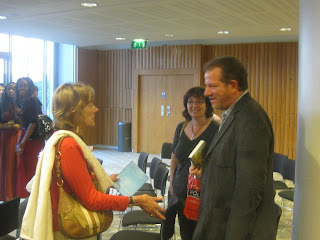 David Medalie, Author of The Mistress' Dog. I really enjoyed his story. It was simple, yet imagined in such detail.
Unfortunately I didn't get a photo of the last author on the shortlist, Tim Keegan. He's a Historian, which is right up my street. Ah well.
Of course the perennial question of whether the writer's considered themselves 'African Writers' came up. Eye roll. Been there. Done that. I liked Tim Keegan's answer. He's a white South African and he likes being called an African Writer because being African is part of his identity, even though his skin is white. Short, sweet and simple. Ok folks. Back to the deadlines.
Posted by authorsoundsbetterthanwriter at 22:43 No comments: 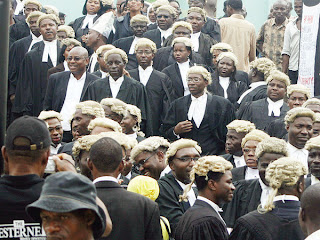 I don't understand why anyone would wear a scratchy wig and a black gown in such heat. The sweat collecting on them could probably irrigate a farm. Someone needs to redesign ASAP. This colonial mentality has gone too far.
Posted by authorsoundsbetterthanwriter at 02:32 6 comments:

Email ThisBlogThis!Share to TwitterShare to FacebookShare to Pinterest
Labels: Nigeria

Everytime I tell people my name is Chibundu, they promptly begin to call me Chibuzo. I have never understood why and I have never seen any benefits to this misnomer. So I was glad to stumble across this song. Now it's my own personal theme song.

Posted by authorsoundsbetterthanwriter at 21:33 No comments:

Email ThisBlogThis!Share to TwitterShare to FacebookShare to Pinterest
Labels: Music

Hello readers. I'm afraid I have quite a few writerly deadlines looming and breathing down my neck. So I'm going to take a break from this blog for about 3 weeks. Nigeria was fantastic, my flight back was incredibly comic and I'll tell you all about it when I return. Ka chifo nu.
Posted by authorsoundsbetterthanwriter at 18:08 No comments: