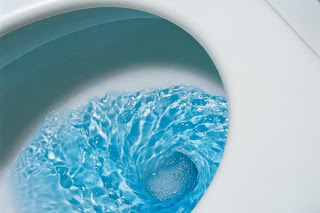 I suffered from severe bouts of constipation when I was a child. My mother blamed it on the lack of fibre in my diet; she blamed it on the fact I hated drinking water; she blamed it on my stubborn nature. Whatever reason, every two or three months, I found myself straining on the porcelain throne, then leaving my position to suck balefully on an orange, then resuming duty, then leaving to down a glass of water, then going in again, then coming out for some garri and water, then in again, then out again and back and forth, and back and forth.

Now anyone who has ever had serious constipation will know that you don't expel very much on your first few tries and this is very similar to the first stage of a novel. You have a great idea, a large, chunky piece of novel that is shoved inside you, waiting to come out. So you pick up a note pad, a typewriter, a laptop and you sit down, pen in hand, fingers poised and nothing comes out. Hopefully, not literally nothing but just very tiny, minute shavings of the great mass that is inside you that might as well be nothing.

I started the Spider Kings Daughter, two years and a few months ago. I remember the day clearly. It was the last day of my AS Level exams and I was relieved, a little stark eyed from cramming the functions of T-cells and lymphocytes into my head but I had promised myself that I would start writing this novel that had a title and a vague plot, the very day I finished my last paper so I turned on my lap top.

I sat down to write at around 4 o'clock and didn't get up for about five, six hours, and when I was done, I had a page long prologue that was about 600 words in length. I don't know if that sounds good to you, but six hundred words in 6 hours seemed frustratingly ridiculous. I mean I was happy with my six hundred words and very excited that I had started but when you did the Math, that was a hundred words an hour, fifty words every half hour, 25 words in 15 minutes and just over one word a minute which included words like but and 'and.' It only got worse. Two weeks later, I had five pages, three months later only 30, as you can see, this was an exponential decrease in pace.

However, take heart ladies and gentlemen because the one thing I learnt from my childhood years of constipation is that eventually, it has to come out. There comes a point where your body cannot endure any more. It has to make space for the next batch, your mind has to make room for new ideas and products, and so you go back in, you turn on your computer, and you shake, and you shudder, and you lose sleep, until you can say honestly, that it is all out and you can sleep properly now.

It took me a while to reach this point. I was about two thirds through when something just clicked, my mind had, had enough and literally the rest of the book just shuddered out of me. I was up every night till around 3am, writing in days, volumes that would have taken me weeks and before I knew it, it was The End. I wasn't finished. There was still editing and polishing and garnishing to do, but the novel was out; I could rest properly... until the next one.

P.S
Onyeka Nwelue the author of Abyssinian Boy was kind enough to mention me in a list of influential Nigerians under 20. Here's the link.
Posted by authorsoundsbetterthanwriter at 14:37

Email ThisBlogThis!Share to TwitterShare to FacebookShare to Pinterest
Labels: About Me, NaNoWriMo