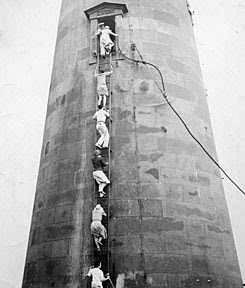 We Nigerians pride ourselves on having a classless society. Like the Americans, we strongly believe that anybody can become a somebody if they work hard enough. Some magnates have little more than a primary education behind them, many somebodies were street hawkers, mechanics or even petty thieves in their youth so we have grown to overlook a person's antecedents. After all, we live in a society where almost all the money is new so as long as you have it, we're not too discriminating about it's age.

Yet though class as the British define it is absent in Nigeria, we have this curious thing that we call 'levels.' ' Levels dey' is a phrase that is common. 'Know your level,' is another one and of course the classic rhetorical, ' Do you think we are on the same level?' Yet, though I use the term freely, I am still unsure as to what exactly a level is.

Unlike class, which is imposed from outside, levels are decided by the individual. In my ranking, I might put the President above the Emir of Kano, in someone else ranking, the Emir would come first. In my ranking, a businessman with a modest company might precede the trader whose education has been entirely informal, in other rankings, the uneducated magnate would always top the list.

I suppose there are pros to every individual deciding for themselves how they wish to grade society but the cons stand out for me. The fluidity and ambiguity of a level means that each person is always constantly clinging to their position, trying as much as possible to distinguish themselves from the level below them, to prove once and for all their superiority.

This is why we constantly feel the need to remind each other that levels dey. These reminders can come in subtle and not so subtle forms. We can say point blank, we are not on the same level. We can bring out our phone and put it on the table so those around us can guess our level from our mobile device. We can use verbose vocabulary, discombobulating those around us into agreeing that indeed we are not on the same level. Everyone is constantly trying to assert their level, while at the same time hustling to move to higher altitudes. Thus we have a curious mixture, where we constantly put down those we see as an inch below us and grovel to those that we see as a centimetre above.

This system of levels has chasmed our society. A man who is secure in his class can speak with civility to his domestic help. A man who is constantly needing to assert his level, cannot speak in anything but an abusive tone to his driver. A woman who is comfortable in her class can use the word please, when speaking to her maid. A woman who is constantly needing to assert her level, can only speak to the maid in commands and orders. On and on it goes.

Here's a video that mentions levels. Watch out for the man at 2:31.

Posted by authorsoundsbetterthanwriter at 16:13