Things I Have Learnt From 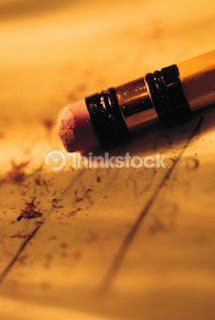 I've been editing my book for about a year and a half now: six months with my agent and one year with my editor so even though I am not a veteran of writing, I am a veteran of editing as most writers will tell you, in particular the best ones, that they do very little work with an editor. There are even some writers who only do one draft. I can only live in hope for the next book. Anyways, all this editing has taught me some things that I would like to share.

1. Backspace is your friend.
In total, I have cut more words from my book than I have in my book. I know this because I made a separate file called 'cut outs from novel' in which I saved everything that I deleted and a few months ago, I discovered my rejected paragraphs and sentences were about thirty pages longer than my book. Four things to look at for when you are using the backspace key.

a) Overwriting.
I fell particularly foul of this. Every single fancy metaphor, allusion, simile and alliteration had to be used in every single sentence. In one sentence, I could allude to popular culture by referencing Naeto C, religious culture by referencing the Bible and if I thought of five good ways of describing something, instead of narrowing them down to three, I'd just use all of them, stringing endless clauses along. This worked once in a while but after I'd done it ten times on a single page, it became tiresome, it became clear that I was overwriting. This is what one risks when one tries to stuff all their fancy literary footwork into each page. Sometimes, the simple sentence with one object, one verb and one subject can be used to much greater effect than the long winded one. So go through and look for the Alasheju sentences in your work and either simplify them or cut them out.

b)Adverbs
Don't belabour the adverbs. This point can't be belaboured enough. Try looking for words that encompass both the verb and the adverb you want to use. For example, he walked slowly can become he ambled. Another way of getting rid of the adverbs of course is just to cut them out because sometimes, substituting them with an encompassing verb can lead you into the trap of overwriting. For example, he walked slowly may become, he perambulated. Perambulated is a verb that should never be used seriously.

c) Keep the dialogue clean
I have the tendency to break dialogue up with meaningless phrases like, he looked up, or he scratched his head, or she rolled her eyes and pursed her lips. My editor keeps reminding me to let the dialogue speak for itself, no pun intended. If a character is irritated, you should try to convey this in what she says as opposed to adding, she rolled her eyes in irritation. Keep it clean.

d). Keep everything you cut.
You never know when it might come in useful.

2.Character Motivation
It's very important for your reader to know why a character is doing something. What I found, while writing THE SPIDER KING'S DAUGHTER, was that in trying to make my plot move in a certain direction, I would make my characters do things that were at best unexpected and at worst completely out of character. Why did peace loving Y, suddenly decide to kill X with a machete? Yes I know X has to die for your plot to move forward but why would Y the vegan kill X? As a writer, you can make your characters do things but if you want your characters to become more than stick figures, their motivation for doing things needs to be better than, I needed to move my plot from A to B.

3. Plot holes
These can be simple mistakes like a character wearing a white suit at the beginning of the scene and then wearing a black one by the end. It can be bigger ones like changing a minor character's name halfway through the book. It can be huge ones like forgetting a character has been killed off. Big or small, these inconsistencies jolt the reader out of the plot and remind her that this is only fiction, something you don't want to do until the reader reaches The End.

These are three of the most important things I have learnt during my editing experience. I hope this list helps.

Posted by authorsoundsbetterthanwriter at 19:45