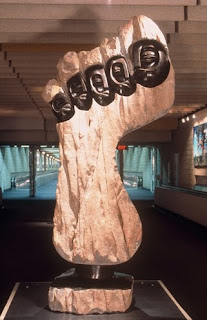 Last Tuesday was the first time I'd set foot in America in over two years. In this short space,the nine hours it took to cross the Atlantic and reach the prickly heat of Georgia had grown more difficult to fill, especially as I was flying BA.
At the end of the flight I was vaguely irritated: by the men who sat beside me and hurdled over my aisle seat when they needed to pee, by the tasteless chicken tikka masala that came in plastic containers hot enough to burn, by the antiquated BA entertainment system that gave me a choice of only 7 movies and by the men who sat beside me and needed to pee at least five times on that flight.
I knew there would be heavy security when I landed. I had steeled my mind for it but I did not expect 4 security checks, 2 baggage reclaims and one x-ray in which nobody explained that the machine I had just stepped into was an x-ray machine until after I had been zapped or whatever it is that happens when a full body x-ray machine is turned on with a human being inside.
This last really, really, really annoyed me. I was seething from this violation of my fundamental human right to be warned before x-rays are passed through my body. And what was most galling was their politeness. Step this way ma'am, please place your hands like this and before I knew what was happening, the doors shut with me trapped inside a clear plastic box, I heard a sucking sound and the doors were opening and the man in the dark blue uniform was saying, "Please step this way ma'am."
So seething was I, that I did not realise that I could take the transit instead of walking to the second baggage reclaim which was five terminals away. And so I walked, and I was walked I grew angrier, and as I grew angrier, I walked.
Who did these people think they were?
Terminal A.
To X ray me without my permission.
Terminal B.
And display me deshabille on their blue screen.
Terminal C.
And potentially murder some of my cells.
Terminal D.
And
I stopped walking. In front of me was a row of wood and stone sculptures. I moved closer to the first and read, Summer Time and the profile of the African sculptor who had created it. I read the next one and the the next one and the next one.
I have never seen anything like this in Nigeria but here in the middle of Atlanta's International Airport was an exhibition of African art, loving oiled and dusted. I stopped in front of each one and browsed the cards stuck to their bases. Here was a mother and child from Zimbabwe, a family from Cameroon but the one that struck with me most was a giant foot called: "Travelling Family."
From the back all I could see was the sole of a giant foot. I paused in front of this sculpture wondering what statement the artist was trying to make. Was it that travelling families got swollen feet after flying for nine hours? Or in travelling they all moulded together to form that prehistoric unit of travel: the foot.
I rolled my eyes as I walked off... modern art.
Then I saw Travelling Family from the other side. Each of the toes was a head and the heads were so close together that they looked like a sleeping family that took up the whole middle row in Economy.
As I left the exhibition, I was glad I had just spent half an hour getting to the baggage reclaim, I was still angry that I had been xrayed but as I left, I thought, only in an American airport would I have had the privilege to see such an exhibition, only in America.
And so for this, God bless America.
P.S
The picture doesn't do Travelling Family justice but I thought I'd show you anyway.

Posted by authorsoundsbetterthanwriter at 15:20