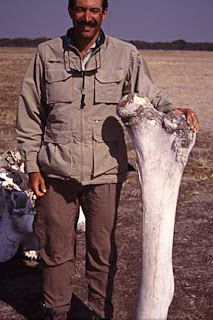 Nowadays, there is an ideal body type for women: skinny. If you are not skinny, you are fat and if you are neither skinny nor fat, then you are this curious hybrid thing between carrot and chocolate, anorexic and sybarite, desirable and undesired, big boned.

Big boned. I have been called that by well meaning relatives defending me in the face of criticism . "No she's not fat. She's just-- You know it's her body type-- She's um--You know that thing-- Big boned."

Big boned is not just a physical description, like tall or brunette or blue-eyed. Big boned is a description with connotations like gangly, or pimply or black. Attached to gangly is the impression of awkwardness, attached to pimply is ugliness and with the juxtaposition of big and boned, a sense of lack is conveyed. Not loss, like when you are called fat, no hope for you but lack, not quite there. Your cells were too calcium efficient, over producing this vital mineral until your bones stretched and widened you into something that was neither fat nor skinny, chocolate nor carrot. And the worst thing about being in this limbo land was it could only get worse. As a relative of mine once kindly informed me when in a flurry of insecurity and self consciousness I decided to go on a diet, "Your body type is not made to be skinny. You can get to like a size 8 but don't try for a six. It won't be normal."

I am certain it was a woman that coined the phrase big-boned. Seeing that there were not enough ways to put down her sex, ugly was not enough, fat was not enough, big boned had to be born. Perhaps it is because humans are socialised to always be physically in competition with one other, men want bigger biceps, girls want smaller thighs.

In the past I've been on a few 'diets.' Me and a friend, another 'big boned' individual who incidentally was never more than a size ten, made a pact to eat only apples, carrots, cucumbers and soy sauce for a week in order to 'detox.' Another time, I was a gymaholic, every night for an hour pounding away on the cross trainer, doing sit ups and swinging weights in my hands. Thankfully, these phases didn't last long. My laziness/elastic confidence/other things I cannot articulate always meant that I was back to reading on the couch and eating normally [N.B my foray into anorexia lasted two days.]

It could easily have swung the other way. After all I saw the reaction the smaller boned relatives and friends had when I shaved a a little flesh off my large bones, took a step towards joining their private party, they were happy that some of that flesh was gone even when they knew I was 'detoxing.'

It's funny, the other day, a relative of mine said to me, "You're so slim." To which I burst out laughing. Me! Big-boned me! Slim!

It seems like many things, this big boned/fat/gangly/ugly/beautiful/skinny thing is relative and as long as you're happy with where your standing, don't ever let anyone tell you different.

Email ThisBlogThis!Share to TwitterShare to FacebookShare to Pinterest
Labels: About Me, Beauty, Weight