Do They Know It's Christmas Time At All? 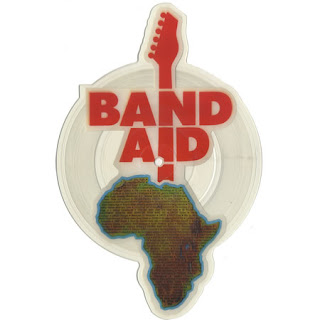 And there won't be snow in Africa this Christmas time

It would have been disastrous if it snowed in Ubulu at Christmas. One night we would have gone to sleep in the soothing warmth of a Harmattan evening, the next morning, only half the village would wake up, the old dead dead from frost, the young coughing and wheezing. No,I am glad snow never came near my village in December. How would we have gone to see the masquerades sway in their raffia clothes, bending to the drum beats, flicking their canes at those passersby that got carried away and came too close. If there was snow, the masquerades would have caught pneumonia in their flimsy dress. If there was snow, we would have slipped on the ice and broken bones as we ran in squealing terror from the canes of the mmou. This white snow that Bing Crosby was dreaming of would surely have been a curse to us in Ubulu. So I am glad it never came.I wonder why the songwriters never worried that there wouldn't be snow in Kuwait, or Barbados, or Dubai?


The greatest gift they'll get this year is life

I suppose this is the greatest gift we all get every year. Presumably the Play Station, the bicycle and the Kindle are of no use if you're dead. Presumably. Maybe this is why my parents never bothered with gifts and maybe this is why we never missed them. Truly, it was gift enough to be alive in a December when my whole extended family converged on a small village in South Eastern Nigeria called Ubulu. About thirty cousins, ten Uncles and Aunties and others of various description, drivers, maids, cooks, would cram themselves into the family 'villa' and proceed to live together for about seven days. We would play and fight and sing and pray and cuss how boring the village was and gist and walk to the village market and run from masquerades and go to Church in our Christmas clothes and occupy at least seven pews of the Anglican Cathedral. They were the best days of the whole year and not even presents could have made them better.

Where nothing ever grows, No rain or rivers flow

This line I have never understood. I wish Bob Geldof and friends could have come to Ubulu in 1984 to see the thick bush that surrounded our house. It was always threatening to creep up to the door step and it had to be cleared continually. All over Eastern Nigeria, there were thickets and thickets of bush in that year of 1984. If only they had stopped by before they penned this opus so they could have corrected the lines to, "Where nothing ever grows, except in South Eastern Nigeria, and parts of Lagos, and Uganda and Kenya and Zimbabwe and South Africa and all those other places where Europeans colonised because they were so fertile." Maybe that was too much of a mouthful and maybe they visited the Sahara and thought in its vastness it encompassed the whole of Africa so I can forgive them but what is this about rivers never flowing? Nigeria is named after a river, the river Niger and last time I checked it hadn't dried up. If only they had google earth then, they could have checked.

Here's to them underneath that burning sun

I quite like the burning sun. In fact as ice covers my garden and the runways of Heathrow freeze over and my skin puckers into goosebumps every time someone opens the front door, my longing for the burning sun triples and quadruples until I have to shine a torch in my face to calm myself.

Do they know it's Christmas time at all

We didn't have Christmas trees and we didn't have snow and we didn't have stockings or elves or plump burglars that crawled down chimneys or reindeer with viral noses or turkeys or stuffing or cranberry sauce but we had bangers and jollof rice and family and masquerades and we did know that Christmas was to celebrate the birth of Jesus Christ the son of God who came to a manger instead of landing in a palace, so yes Mr. Geldof, I suppose I cannot speak for the whole of Africa but yes, in South Eastern Nigeria, my little village of Ubulu, when the 25th of December came, we knew it was Christmas time.

I suppose their hearts were in the right places. Merry Christmas all. Have a great one.
Posted by authorsoundsbetterthanwriter at 18:03