Email Going Round: How Much Is Your Vote? 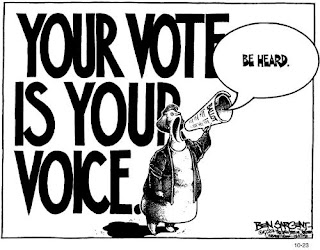 I watched as a politician, frantically trying to convince a voter to cast his vote in his favour, brought out a bundle of brand-new N200 notes and dangled it in the man's face.

"How much is your vote?" he asked, with a deceptive smile on his face.

The man hesitated for a moment, and then handed a piece of paper to the politician saying, "This is the value of my vote."

The politician went through the paper briefly, crumpled it, threw it away in my direction and hurried away, muttering loudly that the man wasn’t being rational.

The man, realizing I had been watching, asked, "Am I being irrational?"

I picked up the paper and took a quick look at it. He had written on the paper the breakdown of his family’s expenses, which the government (according to him) had so far failed to provide or make available for its citizens. He then multiplied everything by four (4) years (the period he is committing his vote to).

"Well," he explained as I continued to stare at his breakdown, "if asking for the basic necessities of life is not being rational, I wonder what is rational?"

"I wasn’t trying to be difficult," he continued, "I believe this is a modest breakdown of expenses considering I have a wife and a kid. If you have a larger family, the value of your vote may be much higher."

God rest the corpers and INEC officials who were killed in Suleja. Tomorrow is round one. No matter what tricks they're trying, it seems Nigerians are still coming out to fight.

Posted by authorsoundsbetterthanwriter at 22:30