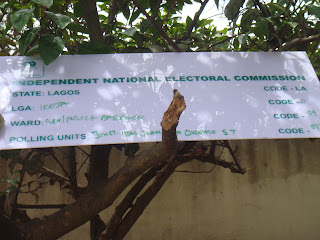 First of all, let me start by saying that this polling post is perhaps the smallest election centre in the whole of Nigeria. However, the elections were carried out in a orderly manner. If this polling station is a microcosm for the whole electoral procedure, then Nigeria is on its way to having its first free, fair and enjoyable election in Nigeria.


The day kicked off at 8am with a process called accreditation. Voters must go to the polling station they registered at between the hours of 8 and 12. They present their voting card to the corpers who then check that the name and face on the card match the name and face they have on their list. Below is the list with voters' details. 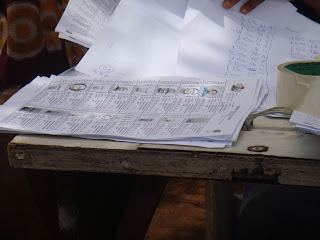 Next, the voter has his thumb marked with special ink to show that he has undergone accreditation. 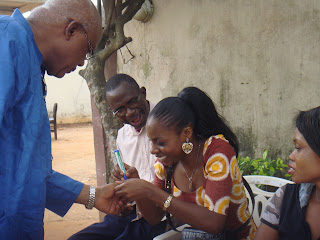 Commendably, the corpers and INEC officials arrived by 7am and were ready to start the accreditation process at 8am sharp when people started queueing. 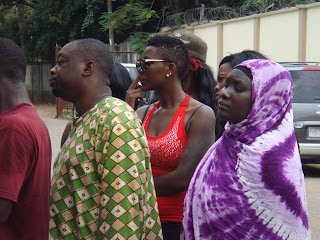 During the accreditation period, the voting process was explained by the INEC officials. This explanation had to be done in English, Igbo, Yoruba and Hausa. There were no Hausa speaking officials so one of the voters stepped up and did the translation. 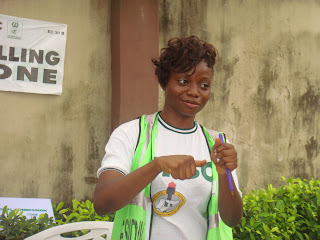 A trendy corper showing voters how to 'pless their thumbs.' 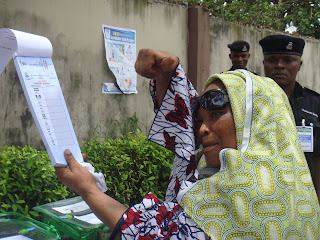 A woman giving the Hausa translation. I wonder how you say pless ya thumb in Hausa.

It was noted that the Labour Party's insignia was listed under the National Assembly Voting papers but was absent in the list for the Senate. This left some wondering if the omission was because there was no Labour Party candidate for the Senate. 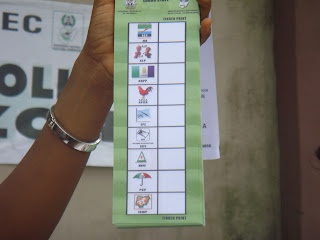 I only recognise the umblerra and the broom. How many can you spot?

After accreditation came voting. At all polling stations, voting started at 12.30pm and at this particular station, it was decided that voting would continue to 4pm. This was actually an anomality as voters should not have been allowed to vote if they were not there by 12.30. This will be ammended for next week. All accredited voters must line up and be counted at 12.30. If any arrive after 12.30 when the voters have been counted, even though they have been accredited, they cannot vote. 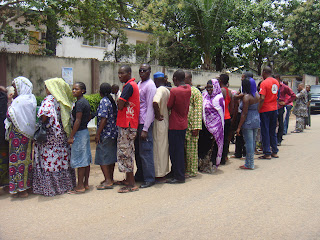 Some people who had registered to vote but missed the accreditation process, turned up at the polling station to cast their votes at 4. They were driven away. Not only by the INEC officials but by the voters themselves. For the people, by the people.

At this rather late stage, the local councillor for the area showed up. 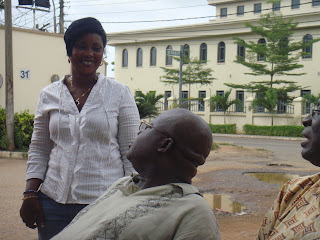 The local councillor being given a grilling by the members of her constituency. For this one day, they were the ones in power. 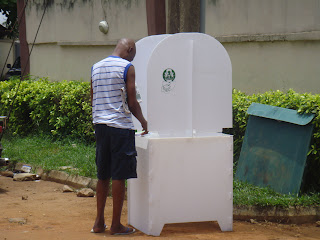 A voter being given his privacy as he makes his choice. 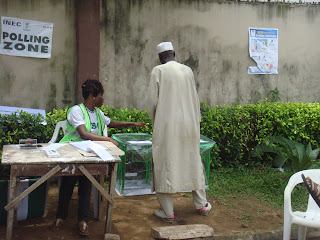 The first vote being cast in the transparent ballot boxes. Nigerians are quite big on symbolism. 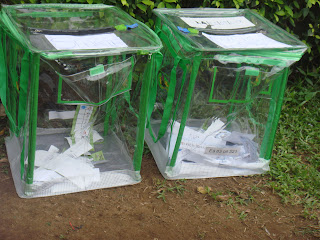 All the votes are cast. 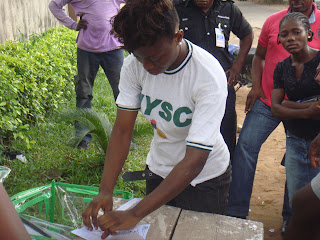 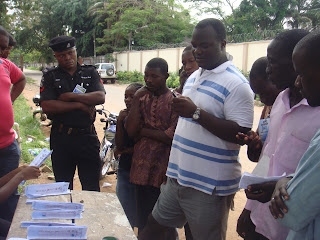 The man in the blue and white shirt is filming the votes being counted on his blackberry. He arrived early in the morning and did not leave the polling station until the votes had been counted. He also bought water for some voters to encourage them to stay till the end and hear the results announced. 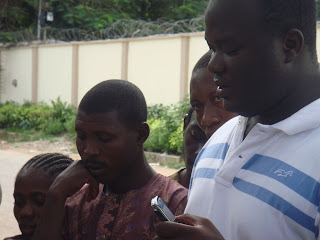 A close up photo of the blackberry journalist. He is part of the Enough is Enough generation. They do things differently. 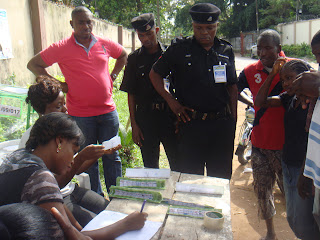 For the House of Assembly, ACN and PDP tied with 23 votes each. CPC had 11 votes. For the House of Senate, ACN nosed ahead with 27 votes, PDP had 24 and CPC had 11 votes. The voter turn out was abysmal. Only 72 people voted while 800 registered at this polling station. Less than ten percent! Hopefully next week, at least half will come out for the Presidential elections.

Once the results were announced, the party agents texted them to their headquarters. 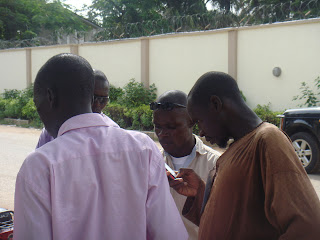 And the day was officially over. At this small polling station and for these 72 voters, INEC had succeeded in carrying out a free and fair, though long winded election. Next week voting will commence at 12.30, thirty minutes after accreditation is done. This will reduce the time spent at the polls.


A more general comment on the results. From this small polling station (and as you can see from the numbers it was indeed very small) it seems that ACN is losing some of its grip on Lagos. Usually, the results would be more of a landslide. The waning influence may be because Bola Tinubu's wife, daughter, son-in-law and sister-in-law are all going for positions in the House of Rep and Senate. There reaches a point I suppose, when the electorate says, Haba.


Join us again next week for more pictures from the smallest polling booth in Nigeria. Hopefully numbers will have grown drastically. I'll try and ask people to take pictures from other parts of Lagos as well. My name is Chibundu Onuzo. God bless and goodnight.
Posted by authorsoundsbetterthanwriter at 17:29