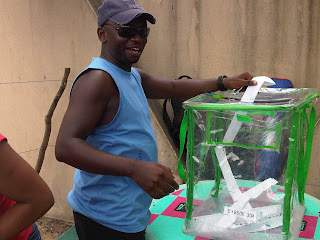 Meet Mr. Boss. Mr. Boss, as he is fondly referred to by his employees, is in his late thirties, married, with 2.4 kids and I suspect a dog. He is comfortable enough to provide a bubble for himself and his family. If the government does not bring light, he can switch on his generator. If they don't bring water, he can dig his private bore hole. If they don't bring security, he and his neighbours can hire their own. No matter who is President of Nigeria, no matter if the elections are rigged, no matter if the military returns, Mr. Boss will most likely remain firmly entrenched in the upper middle class. 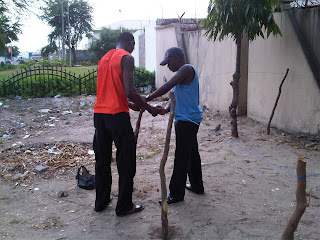 Every election day, Mr. Boss has arrived at 6:15am to set up his polling unit. Long before the corpers have arrived, long before the voters have even thought of accreditation. The man in red in his maiguard. The person who took the photo is his brother. 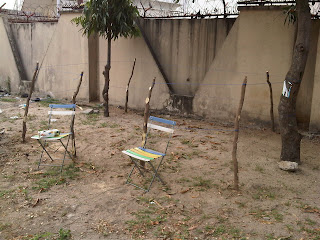 Here was what they set up last week Saturday during the presidential elections. The sticks are sourced from trees in his area, the string and chairs are from his private stock. 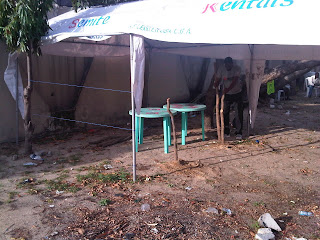 Here was what Mr. Boss and his friends set up this week. Friends I say because each week, when voters arrived and saw the job he had done, a few joined his band of merry men. When I asked why he felt the need to set up an enclosed area for the corpers and their ballot boxes, Mr. Boss replied that he did not want mayhem. "Nobody had access to the corpers as they sorted and counted," so they could do their jobs in peace.

Remember this from last week: 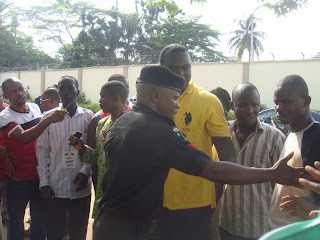 Voters who were disputing with the corpers got so close to the counting table that they had to be pushed back by a police man. Well none of that happened at Mr. Boss's P.U because the voting area was cordoned of and he and his brother created a "gate" so only a fixed number could vote at a time. 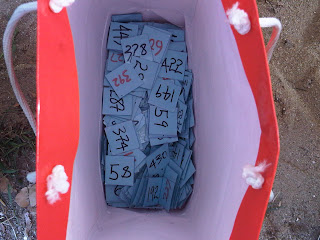 As voters arrived for accreditation, each was given a laminated card with a number on it. Last week, Mr. Boss made 800 of these cards to hand out to voters as they arrived. Voters were accredited according to their card numbers and they voted according to these numbers as well. What was the point of this, I asked? Remember this long queue from last week: 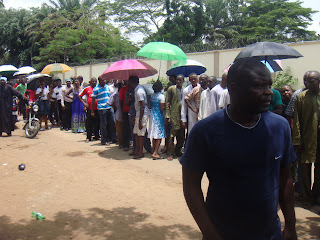 Well, as long as everybody had their card with them, they could be called to vote in batches according to their numbers. There was no need to queue at Mr. Boss's P.U. They voted in groups of twenty, so people sat down on chairs that Mr. Boss and his merry men provided, under a canopy that a voter provided and waited their turn. He says, "My brother and I processed entry into the the area and exit from it...while our two friends processed the line and called up the subsequent batches." Some people had picnics by the side of the road while they waited for their numbers to be called. 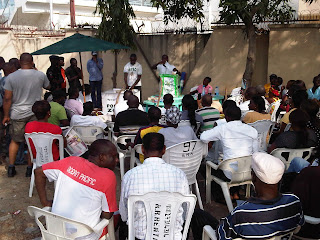 Last week, voters sitting comfortably and far from the corpers as they counted the votes. 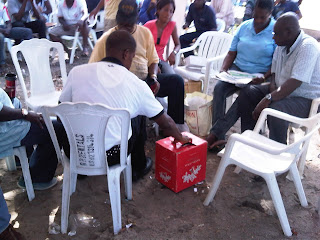 This week voters sitting even more comfortably as they waited to be called. The man in the white shirt is about to open that red carton and share some drinks with his fellow voters. 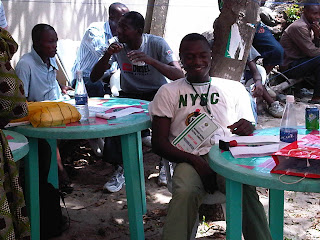 At the end of the day, the corpers had smiles on their faces. No one had tried to kill them for doing their jobs. Instead, people like Mr. Boss had made the event peaceful and enjoyable even, there was an air of faaji around this P.U.

When I asked how he was bothered to do all this when as I've said earlier, the outcome of the election would make little difference to his life, Mr. Boss replied, "Well...someone has to sacrifice for the country otherwise all the booths would have been like the one in your parents area abi? If that's the price I had to pay to get it well organised then I'm ok with it..."

God rest the corpers who were killed in the North. The price they paid was too high. God bless Mr. Boss and raise up more like him. My name is Chibundu Onuzo. God Bless and good night.
Posted by authorsoundsbetterthanwriter at 18:29