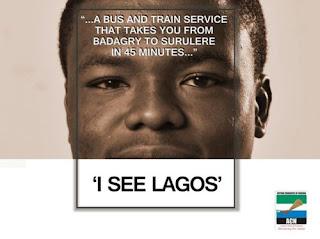 I saw my first dead body in Lagos. I think I was 6. It was a man. If he had been alive, people would probably have called him a mad man. He had dreadlocks, matted and reddish brown from the sun. He was dressed in a long, grey, shirt rag. His body was beginning to swell on the side of the road. His mouth was open; a white paste spilled out of his lips.
We were on the way to school. My car zoomed past the sight, barely slowing down. I asked the driver what happened? He said the man had probably been run over while trying to cross the express at night. It was the military that had done it. He was certain. I could believe it.I always saw the soldiers zooming at fatal speeds in their black vans. If you got in their way, they could come down and flog you with their whips. Or if it was night and they were drunk, they would just run you over. I could imagine that they had not bothered to stop when they saw the man they had hit was just a mad man.
That was the Lagos I saw when I was growing up. Now Babatunde Raji Fashola (Senior Advocate of Nigeria) and Governor of the state I call home, is asking us to see a new Lagos. Like a pastor in church, he is asking us to speak what we want to see. O ye of little faith, speak what you want to see. The voice in the first clip says, "I see a Lagos where I can wake up by 7am after a good night's rest. Get to my train station by 7.30am, travel in comfort enjoying the beautiful scenery."
Like Sarah, I laughed when I heard what the man in this clip was seeing. The thought of someone in Lagos who lives on the mainland waking up at 7am and being on time for work seemed so preposterous that all I could do was laugh. O me of little faith. I had sat too long in third mainland bridge traffic to believe. Yet I am not so cynical that I cannot join my fellow Lagosians in this act of seeing a new Lagos. So here are the things I see in Lagos in the next few years. It may be a dream but the dreamers are often the most realistic of us all.
That's the Lagos I see.

To find out more about the I see Lagos project, click here.
Posted by authorsoundsbetterthanwriter at 14:16