An Evening With Ms Adichie, Mr. Ellams and Many More @ BookSlam 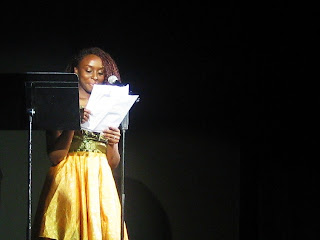 I got there on time. 6.30pm. I didn't have a ticket and I was worried that I might be gated. I didn't know the size of the venue. It would have been a shame to go all the way to Clapham only to return to North London. The queue was long when I got there. Too long for an event that started at 7.30. I saw some of my friends. We had randomly come to the same event. They all had tickets. I wanted to run to the front and tell the guys to save one for me o. I came from North London. You will pay my transport here.

In the end there were tickets for everyone. The venue was quite large. When we were all inside it was full but more people could have fitted inside. If it was an event in Nigeria, I would have shown the organisers how to arrange the chairs to increase capacity. As it was, the Okoro Lagosian in me tried to calculate how much Bookslam made.
First poem of the night went to the host, a poet whose name I do not recall, though some of his lyrics have stuck in my head. The poem was called Invisible Kisses. I won't try and reproduce his wraps here but they were good sha. 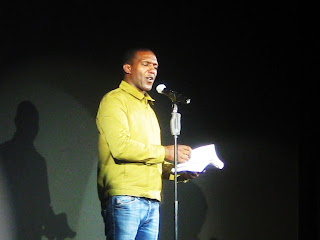 Next up was a poet called Inua Ellams. I've seen him perform before. He came to my Uni for a performance. I went because the poster said he'd done a show at the National and I'm into brand names like that. He was good at Kings but better yesterday. Lighting really makes a difference. When the crowd is dark, I think performers have more liver. He had an excellent poem about about domestic violence. There was a particularly graphic image. A drop of blood fell into the victim's cup of coffee. There's a tinge of bathos when I paraphrase it but it was very powerful in his words. 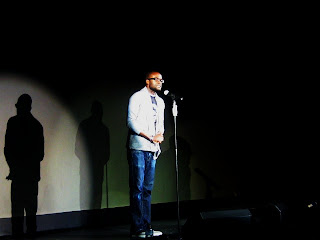 And then we had Ms. Adichie. She's loomed large in my mind since I was a child. I was 0 years of age when Ben Okri won the Booker with the Famished Road. Between that and Purple Hibiscus there were no Nigerian writers people all over the world were making noise about, except the usual suspects: Achebe, Soyinka, Achebe, Soyinka. So of course when Chimamanda stepped on the scene, how could you say you were a Nigerian and an aspiring writer and not know of her. And have an opinion on which novel was better, Purple Hibiscus or Half of a Yellow Sun. And have family members ask, ''So you want to be the next Chimamanda?" when you said you wanted to be a writer.
The short story she read was excellent. It was called Quality Street. I was able to follow every word she said. Don't underestimate the skill required to speak in a Nigerian accent and still convey your words with clarity to an audience that is not solely African. I have my first reading next month.
I went to speak to her afterwards. She was cool. It's an oft used adjective but its the most apt I can think of. She chatted to people normally, like a naija. You know how my people like to hear our people keeping it real. There was no authorial distance. She signed everyone's book, heard a hundred people say how much they loved her books and took each compliment graciously. She was cool. I'm glad I went.
Posted by authorsoundsbetterthanwriter at 22:27