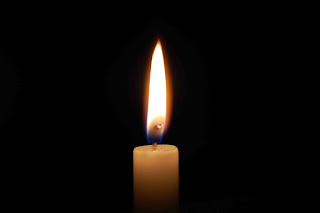 Growing up, many evenings and nights were spent in darkness. I did not mind too much when the power was cut off in the afternoon. Though the house became dim, there was still enough light to read and play Ludo and hopscotch. It was around 6pm when N.E.P.A had still not brought light that the absence of electricity became annoying. There were candles but reading by candle light had been embargoed by my mother for fear we would be partially blind before we reached our teenage years. So between 7pm when we ate and 9- 10pm when we slept, there was a lot of time to kill.

Sometimes we played with fire. This could take up a good half hour. We started by running our fingers through the candle flame. There was no winner in this game but the slower you passed your finger through the flame, the more of a pro you were. If you ran your finger through very quickly, you didn't feel anything and chicken that I was, I always took this option. Also, there was the two finger candle game where you tried to put out the flame by pinching it between your thumb and your index finger. I never attempted this round but some of the maids would show off  by putting out the flame in this fashion. Then of course there was the candle wax game, which entailed spilling the molten wax on your hands and then scraping it off when it cooled.

However, my personal favourite was the matches game. You took a match, held it to the flame and let it catch fire. You then held it for as long as you possibly could. The further down the match the flame burned, the more proficient you were at this game. One of my proudest moments was when I managed to burn the whole match stick, right from its sulfuric head to its wooden stump. Usually, I could only burn the match for a few seconds before the heat got too close to my fingers and I dropped it. Then one day, I realised that if I held the charred end, I could burn the whole match with ease. After I'd beaten the system, I grew tired of the match game.

I tell this story because over the weekend I went to a seafood restaurant which was mostly lit by candle light. And it wasn't any of those fancy scented candles but the thick, white wax ones that I grew up with it. Of course, we began playing with the flame. I would break off pieces of wax and liquidize them in the blue part of the flame. I would spill the melted wax down the side of the candle. My friend opposite me even ran her finger through, a feat I found I no longer had the liver for. I don't know how but at some point, I tipped the candle too far and the molten wax that builds up under the flame spilled onto the back of my hand. I flinched but to my surprise I was able to chest the pain and even enjoyed scraping the wax off when it hardened.

After we got tired of playing with the flames, we made shadow puppets. I wasn't very good at this, my fingers are quite clumsy, but my cousins could do some wonderful shapes. I never progressed past the perfunctory butterfly but others could act out complete dramas on the walls. When we tired off puppets, we moved to singing. I played the piano, my sister would drum on our much bruised dining table and we would all sing, soprano, alto and tenor. I can still play with my eyes closed because of this training in the half light of the candles.

Sometimes we would go to bed without them having brought light. Other times the light would come suddenly, mid-song. The electricity would startle us, our eyes would squint at the artificial brightness of it and the flame would suddenly lose its magic.  "Up NEPA!" we would shout but we didn't mean it entirely. We had been enjoying  the camaraderie of the candle. With electricity there was no excuse for sitting together and singing. To switch off all the lights and continue making shadow puppets would be foolish when work clothes had to be ironed. And why play with wax when you could watch TV. So we would disperse until the next time NEPA had not brought light by evening and there was not enough diesel to power the generator.

A few months ago I was in America during a storm and the power was cut off. In the evening, candles were lit all over the house that only a day before had consumed an entire village's supply of electricity. It was my favourite night of the trip. This is how things should be sometimes, I thought as I played my uncle's piano with my eyes closed. This is how it should be.
Posted by authorsoundsbetterthanwriter at 11:00

Email ThisBlogThis!Share to TwitterShare to FacebookShare to Pinterest
Labels: About Me, Electricity, NEPA, Nigeria