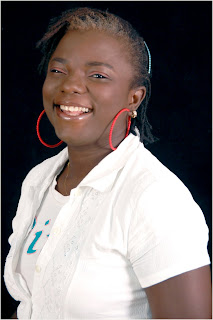 Ms Olofintuade has just been shortlisted for the Nigerian Prize for Literature for her children's book, ENO'S STORY. Before I go on, I must state that the prize money runs into the hefty sum of $100,000. Children's fiction is often overlooked by the bigger prizes so I'm glad the the NLNG decided to pick a shortlist of only books from this field.

The last time I read a work of children's literature was over five years ago. I thought I had outgrown the genre. I thought wrong. I thoroughly enjoyed Eno's Story. The main character Eno, is a plucky kid who reacts to being accused of child witchcraft with courage and a sense of humour. The first thing Eno says in the novel is, "So I'm a witch! That means I can fly and turn into a cat or even a fierce lion." When her Uncle takes her for 'deliverance' she says to herself, "I am a princess not a witch. Uncle Etim and the pastor are ignoramuses."

The subject of the book is timely. I heard about the child witches scandal in Nigeria but I couldn't bring myself to watch the documentary. It's rare to see children's literature tackle such a tough issue but the most memorable pieces of child fiction often deal with difficult themes. The Boy in the Striped Pyjamas by John Boyne comes to mind. Also, The Book Thief by Markus Zusak.

The illustrations in this book are beautiful. I don't think I've ever seen black people depicted in children's literature, except you count Enid Blyton's golliwogs as black, which I don't. Eno looks like a Nigerian girl. Her hair is threaded. Her evil Uncle looks like a middle aged Nigerian man. He appears in a white singlet and sports a pot belly. The houses in the village look like houses in my village.

Ayodele was kind enough to answer some questions that I posed to her. Here is the full interview. If you live in Nigeria, head over to book stores and get a copy of this book. If you live abroad, get someone to send it to you. I wish Ayodele all the best in her writing. She certainly fully deserves a place on the shortlist and I'm looking forward to reading what she produces next.

1. Before I read the book, I knew that it dealt with the theme of so called child witches and I felt that this was a topic too gruesome to be explored in children's fiction. I was glad that you found a balance between the darker and lighter elements of the story. How did you manage to achieve this?

In order to write successfully for children you need the ability to see through their eyes and I don’t mean that in a derogatory way because I was shocked when someone who purportedly writes for children told an audience that she had to ‘go down to the children’s level’ implying that children are inferior and thus one has to ‘lower’ oneself in order to talk to them, that was a cringe-worthy moment.

All I did was channel the story through a child and completely lose myself in the character, I allowed her to tell the story in her own way, luckily for me it worked!

2. How long does it take you to craft a piece of fiction such as Eno's Story and what are the difficulties you find along the way?

Crafting a story sometimes takes months and sometimes the story will come to you whole. So really one can’t predict how long it will take. For Eno’s Story I had the first draft out in three months, it’s as if the story were hiding behind my back and it just revealed itself to me gradually. I can’t say I encountered a lot of difficulties, at least nothing that couldn’t be solved with a bit of research.

3. The illustrations in Eno's Story were excellent. They really brought the characters and narrative to life. How involved were you in this aspect of the process?

Frankly I had little or no input as the illustrations that were sent to me for approval had undergone thorough scrutiny.

4. What are you currently working on?

The Terrible Twins series, the adventurous stories of a pair of twins, Tounye and Kela, who got into scrapes as a matter of course and their friends: a boy called Khalid and a magical creature called Iwin. The draft for the first four books are ready. Hopefully it will be out by mid 2012.

5. What advice would you give to writers who wish to write for children?

Get to know your audience ... children. Play with them, fight with them, listen to them and don’t ever condescend to them. Once you get that part right you will find it easy to write for them.

6.What was your reaction when you found out that you had been shortlisted for the Nigerian Literature Prize?

Frankly I was happy and sad at the same time. It is very anxiety inducing and I’m already an excitable person so I knew I was going on an emotional roller coaster ride. But thus far I’ve handled it even better that I thought I would. I have really surprised myself.

7. I know this last is a little cheeky and I'll understand if you choose not to answer but if you did win, what would you do with the prize money?

Posted by authorsoundsbetterthanwriter at 23:39