An Evening at Parliament 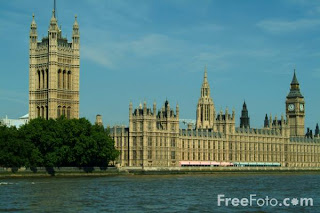 First of all, let me confess my ignorance in the midst of dear friends who won't hurl abuse at me. I got to Westminster station about twenty minutes before the event was due to start. Exit 3 said House of Parliament. My invite said House of Commons. Dear blog readers, I had a serious moment of panic. With not long to go before the meeting began, I became worried that the House of Commons and the House of Parliament were different places. Such are the gaps in my general knowledge. Thankfully they are the same place.

Before I found the meeting room, I walked and walked and walked. Every time I reach another desk with a police man I would ask, where is X room? They would reply, "Just straight down miss." Just straight down, straight down, up a few flights of stairs, straight down before I finally got to where I was going. I passed some busts of former Prime Ministers: Lord Palmerston, Gladstone, faces from my history books. As I walked to the room, my boots clicking on the stone floors, I kind of understood why people want to be powerful. There is something that feels good about striding down a long corridor, hearing your shoes click on the floor and feeling you are going somewhere important, you're rushing to a major decision that lives will hang on.
Now to the reason I was in the House of Commons in the first place. It was a meeting of The All Party Parliamentary Group on Nigeria and it was organised by Chatham House. No, I had never heard of this group of MPs from all parties who "aim to create a better understanding of issues relating to Nigeria; to promote links between Britain and Nigeria and to support development and democracy in Nigeria." Members of the group include Dianne Abott and Chuka Umunna.
There were three speakers. A Researcher on Nigeria from the Humans Rights Watch. The Detective Chief Inspector Economic and Specialist Crime Command, Metropolitan Police and Oba Nsugbe QC, SAN, Head of Chambers, Pump Court Chambers.
The researcher just didn't do it for me. Perhaps because he had limited time, he could only give an overview but unfortunately, a lot of what he mentioned could have been read on the Nigerian online newspaper, 234Next. The nadir for me though, was when he stated that in the past few weeks, the EFCC had arrested 3 governors. Immediately my ears pricked up. Three governors? No. They were EX-governors because the Nigerian constitution does not allow a sitting governor to be prosecuted. If the EFCC could prosecute current governors, then they could catch the criminals early instead of waiting for 8 years and billions of stolen Naira later. That a whole researcher on Nigeria could make this seemingly trivial error, didn't inspire confidence. Maybe the Human Rights Watch should hire some Nigerians to research about Nigeria. They might be able to get more inside gist.
The next speaker was from the Metropolitan Police. Immediately, I felt on this man's side. When he spoke of the trials of catching Nigerian crooked politicians, I really felt for him. He spoke of the case of Alamesiegha. They caught him at Heathrow with a suitcase full of hundreds of thousands of pounds in cash. They arrested him. He asked for bail. He wanted to return to Nigeria to sort out a few things. He said he would be back. They were not stupid. They knew he wanted to disappear. He said he would come back. At his hearing, the whole Attorney General of Nigeria left his duties to come and plead that Alamesiegha be allowed bail. Eventually, bail was posted at 500,000 pounds. It was paid without a blink. Alamesiegha has not been heard of since. The Met is doing better than EFCC. They have secured 15 convictions in 5 years whereas the EFCC has only secured 4 convictions of major political figures since its inception. Which is kinda pitiful. I was on the Met's side.
Then Mr. Nsugbe spoke. First of all, most of the money recouped from the Ibori cases and others of that ilk, isn't returned to Nigeria. I almost had a fit. I could not believe what I was hearing. Most of the money wasn't returned?! Where did it go? It first went to the Home Office, then to the Treasury, then the Met was reimbursed for the time they spent tracking down the criminal, then finally, at the discretion of Treasury, some, SOME of it, MAY go back to Nigeria. Of the 400 million dollars of looted Nigerian money that has been recovered abroad, most of it has not returned. Ladies and gentlemen, there is no charity in this world.
The man from the Met made his rejoinder. After all, sometimes they returned to money to Nigeria and nobody even bothered to cash the cheques. He told one story of how expired cheques were found in the Attorney General's top drawer. And of course, there was the worry that the returned money would just go back into corruption. No point chasing down laundered money, to chase down the same laundered money a few years later. But still, these arguments don't really hold water. If I leave my laptop lying around and it gets stolen, no-one has a right to tell me they won't give it back because they are worried I might be careless and it might get stolen again.
After this revelation, the audience was less than kind. One woman asked why the Metropolitan department that handled corruption was not expanded? After all, it was a profit making organisation (oooh low blow.) In the end, I agree with Mr. Nsugbe. There has to be a balance. The money should be returned but it should be monitored by a credible organisation. When 600 million dollars of Abacha's loot was returned to Nigeria, it's expenditure was monitored by the World Bank and thus, a lot of it was actually put to good use. But sha sha, these people should give us back our money, that's my own.
All in all, I enjoyed my 1 hour in parliament. All I had to do was register online. I didn't know anybody. I didn't need any connections. I wondered when I was leaving, if I could get into a meeting in the House of Senate with such ease in my own country. I doubt it.
Posted by authorsoundsbetterthanwriter at 06:47