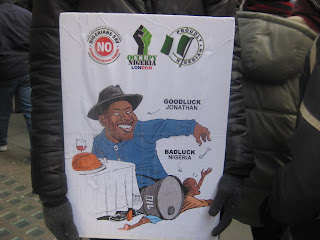 As you may know, the cost of petrol has more than doubled in Nigeria overnight due to the removal of the fuel subsidy. With little organisation, spontaneous protests have broken out all over the country. These protests have been dubbed OccupyNigeria by the twitterati and the name seems to have stuck. In solidarity with their brothers and sisters in Nigeria, today, Nigerians in the UK came to protest in front of the Nigerian High Commission on Northumberland Avenue.
Personally, I think there is some very sound, economical, common sensical thinking behind the removal of the fuel subsidy. However, I do support a peaceful protest and I'm always glad to see the Nigerians in diaspora uniting, so I went along to looku looku, take photos and report for you guys.
The event started at 12.30 and sources tell me that for once there was no African time. At 12.30, a sizeable crowd gathered to express their disapproval of Jonathan's policy. The atmosphere was festive but somewhat intimidating when I arrived at 1.30. I stood opposite the crowd, wondering whether to join them or pretend I was just a casual passerby. People were pushed right up to the barricades and I worried there would be a crush. Then I heard a trumpeter toot a line of, "Winner Ooo, Winner!" Nah my people nah. I crossed the road to join them.
When I got between the barricades, I was relieved to see the crowd was not at dense as I had feared. Still the numbers were sizeable. A petition was going around which I declined to sign. A group to the left was chanting, "We no go gree o! We no go gree!" Everyone's phonetics was dropped for the day and to the left and right of me, I could hear heated conversations going on in Nigerian accented English. I saw people from my Church between the barricades. I saw my Muslim friend from Kings. I hung out with an Igbo journalist. It was Wazobia and all the languages in between.
Prior to my arrival, a former presidential aspirant showed up to speechify. Apparently his name had not been on the list of those to make speeches but once he arrived, he was given immediate priority. One disgruntled protester complained to me, "Now photos are going to go round and people will think Dele Momodu is pulling crowd in London." In his view, it would work to Mr. Momodu's political advantage to be shown speaking to a crowd he had done nothing to assemble. In fact, he even went as far as to suggest Mr. Momodu would gain economically from this. "Goodluck will phone him and ask what he should do to calm the people in London and he will now say, bring 50 million pounds." This statement is indicative of the level of distrust Nigerians have come to have for their government. We now see conspiracies and cabals everywhere.
I walked round and took some photos of the placards I saw. 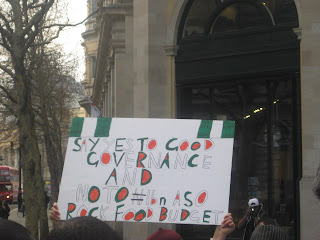 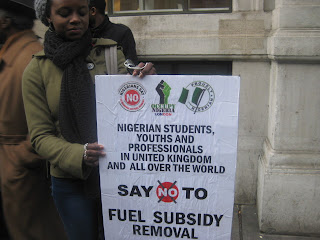 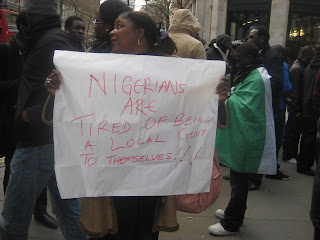 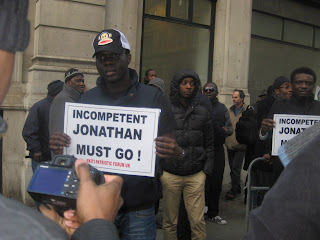 There were camera crews hovering around and I recorded one woman venting her frustration at the government of Nigeria. Because they couldn't get their act together, Nigerians had to come abroad to be 'cleaning yansh' as she bluntly put it. She had come out to protest today because those in Nigeria, she believed, would be killed if they came out to do the same.
My favourite part of the event was wandering around and striking up conversations with strangers. I got accused of being a member of the Jonathan family. My patriotism was called into question. Everywhere discussions were springing up. I say discussion but a passerby might have thought heated argument. It was all in good cheer though. Shouting soon dissolved into laughter, handshaking and back slapping. I love my country people.
I left when the protest was dying down. At the time I left, the Nigerian High Commissioner had still refused to receive the petition. His absence was irrelevant. The people had opened their mouths and discovered they could speak. My name is Chibundu Onuzo. God bless and good night. 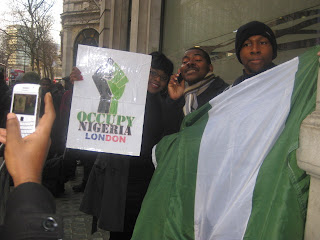 Posted by authorsoundsbetterthanwriter at 19:38