An Evening With Lamido Sanusi 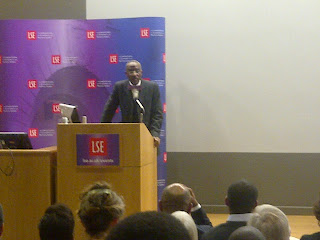 He was crisp, the kind of man you can imagine refused to wear rumpled clothes to school when he was a child. Slight of frame, he walked in with a shrinking gait, head down but once he stood behind the podium he grew more comfortable. His speech was clipped, almost British in cadence. He started off with a self deprecating joke. "I've been told that this is the closest I will ever get to a Nobel lecture," he said, clutching the podium. So this is the Sanusi Lamido Sanusi, I thought as I settled down in my seat.

His talk was titled 'The Global Banking Crisis: an African Banker's Response' and  even though at times he retreated into an obscure financial lexis of mutual funds, recapitalisation and long term financing, I could generally follow the gist of what he was saying.

In 2007-2008 when the first round of the global crisis hit, Nigeria was spared the impact because in many ways, our financial market is isolated from the big deals. In the second wave of 2009, Nigeria took a hit. Oil prices crashed from $147 a barrel in 2007 to $47 a barrel in 2009 and our crude oil based economy took a plunge. According to Sanusi, in 2007 the Nigerian stock exchange was one of the best performing in the world. By 2009 we were one of the worst performing. It was in this same year that Sanusi became Central Bank Governor. He was too modest to say that since his advent the banking industry in Nigeria has changed for the better but this can be inferred from what he told us next.

With banks about to collapse, the Central Bank stepped in. The industry was a mess. Banks were lending people's savings to speculators and petroleum marketers who rarely repaid their loans. Some banks owned 25% of themselves and traded in their own stock. Sanusi spoke of the 'biggest fool theory' where someone who bought a share for $10, sold it off to a bigger fool for $12 who sold it off to an even bigger fool for $15 who after some wrangling sold it to the biggest fool for $20. At which point the biggest fool realised nobody would buy it from him for higher than $20 and the value of his stock plummeted.

Sanusi spoke of a culture of failing banks in Nigeria where C.E.Os would run their banks aground with poor management, the government would take over and these C.E.Os would go and build houses abroad, come back to Nigeria and become senators and governors. In Sanusi's words, "Banks don't fail. They are cured. We were going to save the banks and find the people who killed the banks." On further inspection, after the Central government had taken over some of these  banks on the verge of extinction, it was discovered that it wasn't just poor management that had killed these banks but blatant fraud. Lenders and borrowers were the same people. Money had been taken out of the bank to buy real estate abroad. In one case, 200 pieces of Dubai real estate were found to be owned by a C.E.O.

What followed was a process of carrot and bulala from the C.B.N. Every bank CEO who had been in office for ten years was forced to leave. Most had become entrenched, too powerful for their boards or workers to resist their schemes, whether legitimate or illegitimate. Non-executive directors who had been sitting on a board for over twelve years had to leave. And on the part of the executive, no C.B.N governor could take an appointment in the private financial sector for 5 years after leaving office to get rid of allegations that the C.B.N governor had made policies that would benefit him in his retirement from office. As a result of these new measures and investigation, Sanusi stated that 'we have so far jailed one bank C.E.O and are looking to jail two more.'

On the carrot side, Sanusi organised a weekend away with the C.E.Os of all the banks in Nigeria to find out what went wrong. It was the first meeting of its kind where the C.B.N and the private banking sector had a chance to talk in an informal setting. As Sanusi surmised, there was a 'complete disconnect between the balance sheets of banks and the real economy.' In a country where 42% of the work force was connected to agriculture, why was only 3% of bank lending devoted to this sector? To put it simply the banks were afraid. To lend large amounts to any sectors outside telecommunications and oil and gas seemed too huge a risk in a country like Nigeria.

A country that grew tomatoes locally but was the world's biggest importer of tomato puree; a country  whose highest UK import was refined petroleum, a country that exported imported petrol to other West African countries, a country that imported 5 year old rice from grain reserves, Sanusi even quipped, a country where "General Abacha conducted free and fair elections in Liberia when we didn't have elections in Nigeria. We actually exported democracy." In such a topsy turvy place, you can see why banks were afraid to invest in anything other than the proven cash cows: petroleum and telecommunications.

Of course, the subsidy issue came up. Early on in the evening he joked, 'If there are any Nigerians with shoes, please warn before you throw them.' He added before the QandA session began, 'I've read all the facebook comments. I know half of the people in this room are not happy with me over subsidy.' And in true form, once given the opportunity, many in the audience zeroed in on this issue of subsidy removal.


Just as an aside, our people can be very funny. Some stood up and listed all their qualifications before they finally got to their question. Really, do we all have to know what your Common Entrance score was before you ask your question? Others didn't ask questions but made impassioned speeches about the unfairness of subsidy removal. One audience member asked in what I assume was a rhetorical question, "If the UK government catches people claiming welfare benefits they are not entitled to, will they decide to scrap welfare altogether?" I'll leave you to draw the link between his question and the removal of the petrol subsidy.

We've all heard the economic pros and cons of subsidy removal. For perhaps the millionth time in the last 23 days, Lamido said, 'I don't have any ideological opposition to subsidy but subsidise production." He added that the subsidy was a hedge because there was no arrangement for rising oil prices so sometimes the government in paying a subsidy, paid more than the consumers 65N. He explained that subsidy payments were made on the basis of documents. 'If you bring me documents saying you brought in 10 million litres of fuel, I will pay you 7.5 billion. If you're a Nigerian, you will bring me those documents." On the matter of policing smuggling of subsidised petrol to West Africa, he pointed out that 22 out of 36 states in Nigeria shared land borders with other countries. He painted a grim picture of the furlongs of barbed wire that would be needed to secure such borders. Even in his adamant defense of subsidy removal, he was at least gracious enough to admit that government had failed in communicating the policy to the people.
What I enjoyed more than this subsidy rhetoric, was Sanusi's poking fun at Nigerians. He spoke of how at a meeting of bankers he had said, "The Nigerian stock exchange has a total capitalisation of $40 billion." Those assembled had applauded. Next he said to them, "This makes ours the third largest stock exchange in Africa." Again, more applause. He concluded, "Yet that is only equivalent of half of the total value of Goldman Sachs...after the financial crisis." The room went silent.

And of course there is the characteristic irreverence he shows to those in power, making you forget for a moment that he is one of them. He joked that the people who complained most about the C.B.N cashless economy initiative, were those who needed to carry Ghana must go bags of cash around in the night. He added that whenever he goes abroad and people ask, 'how come oil prices are going up and foreign reserves in Nigeria are going down?" he would very much like to answer, "Because people are stealing the money."

I found myself warming to Sanusi. It was unfortunate that nobody asked what austerity measures government members were applying to their pay cheques now that they were making the country swallow the bitter pill of subsidy removal. It would have been even better to find out what measures Sanusi himself was taking to make sure his expenses sheet tallied with this mood of austerity. Perhaps such a question would have made him squirm and his effortless delivery may have stuttered. But I doubt it. The man is a cool fish.

He ended his talk by saying that 2012 is the year of the woman. The C.B.N will allow loans taken by women at single digit rates of interest. It is well known that women are the driven force in small and medium scale enterprises. I will clink my glass to such a policy any day.
Posted by authorsoundsbetterthanwriter at 00:26